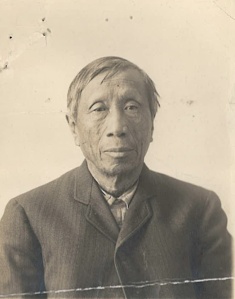 In December 1919 Charley Poon Wing was anxious to visit his sister in China before she died–she was very old, in ill health, and he had not seen her since they were children. Before he left The U.S. he applied to re-enter the country as a returning domiciled merchant. Although he was a laborer many years ago, he now considered himself a merchant. On his return trip Wing arrived in Seattle, Washington on 18 April 1921 on the S.S. Princess Alice but was denied admittance. His case was appealed and he was finally admitted on 6 June 1921. [He spent almost two months at a detention center waiting for the final decision.]
Wing first entered the U. S. at San Francisco in 1875 at the age of ten and remained here continuously until 1919. He was a citizen of South Dakota, owned property worth about $600, paid taxes, and was a registered voter. He voted until he was prohibited by the Chinese Exclusion Act in 1892. He had a certificate of residence No. 135,817, issued at Omaha, Nebraska in May 1894.
Charley Wing applied for readmission as a merchant but under the provision of the Exclusion Act he was deemed a laborer. Because the immigration authorities thought he was trying to enter fraudulently he was subject to deportation. An appeal was made and he was landed as a returning laborer issued nunc pro tunc. [Latin for “now for then,” this refers to changing back to an earlier date of an order, judgment or filing of a document. See Law.com]
Harry L. Gandy, a former member of the U. S. House of Representatives, and a friend of Charley’s, testified that he had known Wing many years and that he should be admitted as a citizen of the state of South Dakota. Gandy wrote a very convincing letter in Wing’s favor explaining that Wing was now an old man and if he was not admitted and forced to go back to China, he will probably die there, alone.
Mr. J. S. Gantz, testified that he had known Charley Wing over 30 years and that Wing had voted prior to 1889 when the Enabling Act [when South Dakota became a state] was passed. Wing was the manager and head cook at the Chicago Restaurant in Rapid City. [Because Wing also did manual labor as head cook, the immigration authorities considered him a laborer.]
According to the records of the Register of Deeds of Pennington County, Wing was the owner of lot 8, block 7, Feigel’s East Addition in Rapid City assessed at $400. Although Wing was the manager of the restaurant, Robert F. Davis, Immigrant inspector, did not think he qualified as a merchant.
Yee Sing Wah and Yee Wah Ong, partners at Chicago Café, testified that Charley Wing was a partner in the Cafe.
Louis W. Napier, the proprietor of a soft drink place in Rapid City, testified that he had known Charley Wing for 25 years. He said he wouldn’t classify him as a merchant but he was a businessman. His definition of a merchant was one who deals in merchandise although Wing was the proprietor of several restaurants over the years. “He always contributed to any cause, churches and civic movements, campaign finds, etc.”
George F. Schneider, president of Pennington County Bank, testified that he had known Charley Wing for over ten years. Schneider thought Wing was a merchant and in charge of supervision of his restaurant who also did manual labor as a cook so in the strict definition of the Act he was not a merchant.
Affidavits testifying to the good character of Charley Wing were filed by W. L. Gardner, a furniture dealer in Seattle; James B. Barber, a contractor and builder; Charles A. Whitson and Guy Wing, both workers at Wing’s Cafeteria; and Edmund Smith, a lawyer in Seattle.
In the five-page statement filed by Smith & Chester, Wing’s attorneys they reiterated all of Charley Wing’s qualities and point out the sad predicament he was in. They said Wing was denied re-admission because he stated he was a “restaurant man” when he left and a “merchant” when returned. They said, “The government does not mean for its functions to serve as a trap, nor to use this kind of a mistake as a snare for the unwary.” They ended their plea,

“Exercising the broad discretion given to the Secretary of Labor, we earnestly request that the decision of the local board be set aside and an order be entered nunc pro tunc, admitting appellant under his true status, if he cannot be admitted as a merchant.”