On board the S.S. President Madison, between San Francisco and Victoria, British Columbia, near the Port of Seattle, a baby girl was born to a Chinese couple. Immigrant officers came on board to interview the father. A statement was taken from Jung Fat, also known as Carlos Chon, on 14 October 1932, His wife, Maria Adelelma Ley was present during the interrogation.

Jung Fat was born about 1901 in Gow Gong City, Nam Hay District, China. In 1914 he sailed from Hong Kong to Mazatlán, Mexico where he was lawfully admitted and eventually became a merchant. He married Maria Adelelma Ley on 28 December 1929 at Comolote, State of Sinaloa, Mexico. Both were “full-blooded Chinese.” Maria was born at Acoponetto, State of Durango, Mexico. Her parents died when she was young, and she was adopted by a Spanish woman. She grew up speaking Spanish and a little Chinese. Jung Fat had never been back to China and Maria had always lived in Mexico. They were not deported from Mexico, but the Mexican government appropriated their grocery and merchandise business. They used all their money to cross the border from Mexico to the United States near Nogales, Arizona. Their daughter, Jung Hong Lin or Auchalina Chon, about age two, was with them. The family was taken into custody by immigration officers, taken to San Diego, and put on a ship to San Francisco. From there, they boarded the S.S. Emma Alexander. Maria gave birth to a baby girl at 10 p.m. on 5 October at Latitude 44° 24’ North, Longitude 124°, 51’ West, on the high seas enroute from San Francisco to Victoria, B.C., Canada.

A few days later after interviewing the family, T. W. Lynch from the Seattle Immigration office sent a letter to the office in San Francisco giving them information on the birth and the El Paso file numbers of the parents and their older daughter, Jung Hong Lin.

[Because of the birth at sea near Seattle, I thought there might be a newspaper article on it. This is what I found:]

On Friday, 7 October 1932, page 14, the Seattle Daily Times published a dramatic account of the birth:
“Father Neptune to Guide Destinies of Little China Emma.”
“There is an old legend which says that Father Neptune and the guardian spirits of the sea          watch over the destinies of those mortals who are born on shipboard, protecting them               through storm and tempest and guiding their voyages safely to port…”

Daniel McLellan, M.D., a passenger from Vancouver, B.C. delivered the baby. Mrs. Alice Hooker and Mrs. Grace L. Steward arranged to have Mrs. Chon moved from her third-class cabin on the after deck to a roomy stateroom. It was suggested that the baby be named Emma Alexander Wong [sic] but the document certifying her birth gives her name as Chon Chow Ling.

Back to the file: 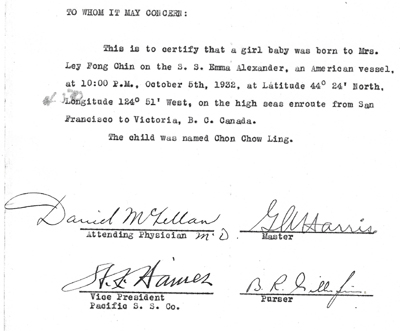 On October 15, the family left for China on the S.S. President Madison. Jung Fat left China as a child and Maria had never been there. They were penniless with a toddler and a new-born infant. China was just recovering for the Han–Liu Civil War. They planned to reside with relatives in Gow Gong City.