In December 1913 Edward J. Ar Tick/Artick testified that he was the son of Hee Ar Tick (John Ar Tick) and Margaret Sullivan, born on 1 November 1891 at 114 Orleans St., East Boston, Massachusetts. He presented a 1906 certified copy of his birth certificate to the immigration inspector for his review. [The certificate is not in the file.]

When Edward was about three years old, his father left his mother, and they went to live nearby with Robert S. and Lottie Ar Foon and their son Henry S. Ar Foon. Edward was not told exactly when or why his parents separated but when Edward was about eight years old, his father told him that his mother had died recently. Robert Ar Foon died in 1901. Edward and his father continued to live at the Ar Foon home. Edward’s father was a cook on the tugboats, Marguerite Dunbar and Robert S. Bradley.

Edward and his father left Boston for China in August 1906. Edward thought of Henry as his brother and called Henry’s mother “Ma.” They corresponded while Edward was in China. Henry brought a packet of Edward’s letters to his immigration interview as a witness for Edward. The letters were to be returned to Edward when he arrived in the U.S., but they are still in the file.

The file contains seven letters Edward wrote to Henry from Hong Kong from 1908 to 1913. 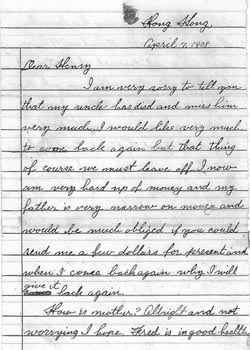 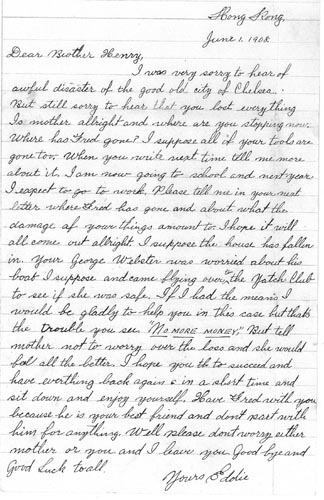 [Chelsea fire of 1908; Henry and his friends in a yachting club] 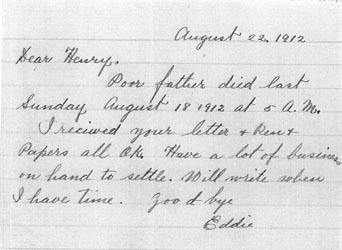 Excerpts from other letters:
10 October 1911: Edward had job as machinist in the machine shop at Oriental Brewery Ltd.; “fortunate that I owe you for teaching me about gasoline engines;” “talking about getting married;” “There is still another book that I should like and that’s Tulley’s Handbook: On the Care and Management of Machinery…;” ”Please get a Morses Catalogue for me…;” “…take good care of Mother.”
8 January 1912: “…hard times;” “see if you cannot raise a passage for me;” “The war in China has not yet affected here but for the last month or so they were down as far as Canton City…;”
24 February 1913: …my birth certificate insufficient…” “…imperative that you obtain affidavits…” “I have still got about $50 to pay up for my father’s burial expenses.”
25 September 1913: “…I purchased two 3rd class tickets cost $300.00 g. [gold] and $631. Mex. These are through tickets. They cover berth & meals on the steamer and only berth on the train, the food being brought out of your own pocket.” Aunt going to live with her daughter; all of the property is sold.

After his father died, Edward started planning his return trip to Boston. In April 1913 Henry S. Ar Toon wrote to the commissioner of Immigration in Boston to try to make Edward reentry into the United States go smoothly. He obtained the signatures from fourteen American citizens who swore they knew Edward J. Ar Tick personally before 1906 and five schoolmates who went to public school with Edward in Chelsea, Massachusetts. [See 9 May 2015 blog entry for Edward J. Ar Tick for details.]

When Edward returned to the U.S, he was accompanied by his wife, Mary Tsang. Edward and Mary were married in the Chinese tradition in 1907. They lived in Kwai Chung, his father’s village. They did not have any children by 1913. They were married again before leaving China at St. Peter’s parish in Hong Kong, China, on 5 November 1913 by D. B. Reynolds, Chaplain Missions to Seamen. Their witnesses were Charles Bradstock and Samuel Arthur Mills. Their marriage certificate was reviewed by Immigration officials; it was decided that it looked genuine, and it was returned to the applicant. Edward swore that he was bringing Mary as his lawful wife and not for immoral purposes.

Edward and Mary were admitted at the Port of Seattle on 13 December 1913, their day of arrival. [There is no more information in the file.]

Additional information NOT included in the file:
According to the 1930 U.S. census, 1 Edward Artick, age 38, was living with his wife, Mary, age 35, and their three children, Robert J., age 15, Margaret E., age 14, and Edward, age 9. Edward and the children were all born in Massachusetts; Mary was born in China.

[A special thanks to NARA volunteer, Lily Eng, who urged me to update this blog entry and include some of the letters. THN]