Raymond Wong 黃瑚, age 38, of Fresno, California, was applying to visit Vancouver, British Columbia, Canada, via United Airlines from Seattle on 9 October 1942 with his wife, Moe Fung Ha, alias Moe Wong Ruth. They were returning to Seattle two days later, on the 11th  then flying home to Fresno. Raymond’s San Francisco file #12017/54189 and Ruth’s Los Angeles file #14036/2809 were forwarded to the Seattle Immigration office for their inspection. 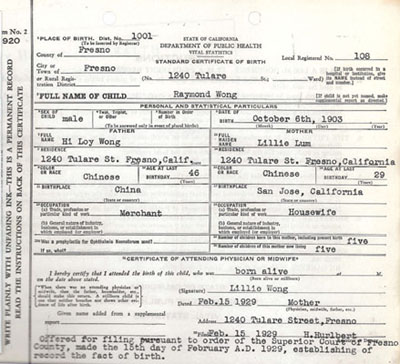 In 1942 Raymond Wong testified that he was also known as Wong Bow Woo, Raymond Arthur Wong, and Ray Wong. He was born on 6 October 1903 in Fresno, California. He was a produce buyer for Levy and J. Zentner and married Moe Fung Ha in Portland, Oregon on 28 March 1931. She was born in Portland. Their two sons, Ronald James Wong, Chinese name Wong You Guai, age 10; and Richard Gene Wong, Chinese name Wong You Keung, age 3, were born at Fresno.

Raymond’s sister, Lena, was a witness for him. She stated she was born 18 September 1894 in Fresno. She married Lew Hock Choon in Fresco on 30 November 1911 according to Chinese custom. In 1926 they married according to the American custom. They had eleven living children and a daughter died in infancy. She listed the names and ages of her surviving children; her siblings and their spouses and children.

Lena swore in an affidavit that she was the “natural sister to Raymond Wong…” The affidavit with her photograph also states the Lena lost her U. S. citizenship through marriage and was repatriated. She held a certificate of citizenship issued in 1934 at the Superior Court of Fresno County; she had never made a trip outside of the United States; and she resided in Fresno.

Another witness was Lum Shee also known as Lum Choy Len. She was born in Sun Wooey City, China and entered the United States at age 11 at San Francisco about 1882 with her parents, Lum Wing Gwai and Fung Shee. She married Lew Yick Song. They had four sons and three daughters. She listed their names, age, and place of residence. She was a neighbor of the Wong family and first saw Raymond when he was about two years old. She correctly identified photos of Raymond’s parents. In an affidavit she swore to much of the same information in her interview and stated that she had not made any trips outside the United States. Her photograph is attached to the affidavit.

Raymond Wong’s application was submitted with a favorable recommendation. The Special Inspector of Immigration at Fresno wrote in his report: “It might be stated that this family has been known to this office for quite a number of years and has always been found reliable.” Raymond and his wife were readmitted at Seattle after their short trip to Vancouver.
[It is hard to imagine how much time and money was spent investigation Raymond Wong and his family.]