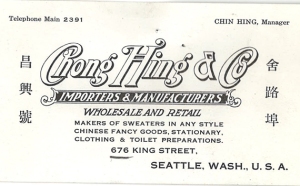 Chin Hing’s marriage name was Chin Fook Hing but he also went by Hing Henry. He was born in Canton, China on 1 September 1875 at one a.m. [It is very unusual to see the time of birth listed in a file.] His father, Chin Suey, was born in San Francisco and his mother was Woo Shee was born in China. Family information was included in a bible and a generation book. His grandfather, Chin Yick, was one of the first Chinese to come to San Francisco. He was married to an Indian woman and worked in the gold mines and then a fruit orchard. After the grandfather’s wife died in 1874 he and his son, Chin Suey, went to China. Chin Suey married Woo Shee soon after he arrived and they had a son, Chin Hing. The family moved back to San Francisco about 1881. Years later they moved to Seattle and Chin Hing became a merchant at Kwong Wa Chong Company. In 1910 Chin Hing visited China and married Tah Soo Len who was born in Los Angeles. Their two children, Chin Hing Henry and Chin Josephine were born in Seattle. At the time of his interview in 1922, Chin Hing was a merchant and member of Chong Hing & Co., at 676 King Street in Seattle.
The interpreter explained to the interviewer that the generation book was a history of Chin Fook Hing’s family for eighteen generations and dated back over three hundred years.
Witnesses for Chin Hing:
Julius Schweigart, in the art and picture business, a resident of Seattle since 1906.
Otto Guthman, salesman at National Grocery Co., Seattle; resident of Seattle since 1905.
Woo Gen, merchant and member of Kwong Wa Chong Co., Wa Chong Co., and Washington Rice Mill Company; resident of Seattle 36 years.