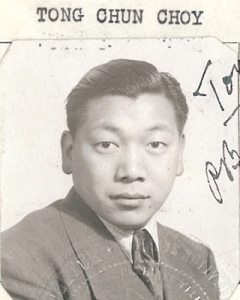 “Tong Chun Choy, Form 430 photo and business card,” 1943, Chinese Exclusion Act case files, RG 85, National Archives-Seattle, Tong Chum Choy (Thomas C. Tong) case file, Seattle Box 828, file 7030/13667.
In January 1943 Thomas C Tong, age 33, of San Francisco, CA, applied for approval of his Form 430, Application of Alleged American Citizen of the Chinese Race for Pre-investigation of Status, so he could spend a long weekend in Canada. The San Francisco immigration office forwarded Thomas’ file 14726/11-23 and his Certificate of identity #63178 to Seattle for review.
Thomas Choy Chun (Tong Chun Choy 唐春才) was born in Lung Gan village, Yin Ping District, China on 16 January 1912 and arrived in the U.S. in 1915. He married May Chin, a native of San Francisco. They had a son, Byron Tong, born 27 November 1935. Thomas was a radio engineer and manager with “Chinese Hour” at KSAN, 1420 kc, 846 Clay Street in San Francisco.
Tong presented his permit to depart from the United States for a period of 30 days, Order No. 4128, Serial No. 4997, Local [Draft] Board No. 76, San Francisco, dated, 27 January 1943 to San Francisco Immigration; the permit was noted and returned to him.
According to R. P. Bonham, Seattle Immigration District Director, Tong Chun Choy left San Francisco on 9 Feb on the SS Princess Alice, destined for Canada only. Tong returned and was readmitted at Blaine, Washington on 13 February 1943.

Chin Hing’s marriage name was Chin Fook Hing but he also went by Hing Henry. He was born in Canton, China on 1 September 1875 at one a.m. [It is very unusual to see the time of birth listed in a file.] His father, Chin Suey, was born in San Francisco and his mother was Woo Shee was born in China. Family information was included in a bible and a generation book. His grandfather, Chin Yick, was one of the first Chinese to come to San Francisco. He was married to an Indian woman and worked in the gold mines and then a fruit orchard. After the grandfather’s wife died in 1874 he and his son, Chin Suey, went to China. Chin Suey married Woo Shee soon after he arrived and they had a son, Chin Hing. The family moved back to San Francisco about 1881. Years later they moved to Seattle and Chin Hing became a merchant at Kwong Wa Chong Company. In 1910 Chin Hing visited China and married Tah Soo Len who was born in Los Angeles. Their two children, Chin Hing Henry and Chin Josephine were born in Seattle. At the time of his interview in 1922, Chin Hing was a merchant and member of Chong Hing & Co., at 676 King Street in Seattle.
The interpreter explained to the interviewer that the generation book was a history of Chin Fook Hing’s family for eighteen generations and dated back over three hundred years.
Witnesses for Chin Hing:
Julius Schweigart, in the art and picture business, a resident of Seattle since 1906.
Otto Guthman, salesman at National Grocery Co., Seattle; resident of Seattle since 1905.
Woo Gen, merchant and member of Kwong Wa Chong Co., Wa Chong Co., and Washington Rice Mill Company; resident of Seattle 36 years.

This is the cover and back page of a 16-page booklet, “A Story of Silk,” included in Mark Ten Suie’s file. Besides the sericulture of the silkworm it contains a list of the stockholders of the American-Chinese Silk Manufacturing Company. Other subscribers are capitalists, physicians, merchants, salesmen, attorneys, teachers, a detective, bankers and a variety of other people. The head office was located at 316, 317, and 318 Boston Block in Seattle. Mark Ten Suie was being sent to China to secure a site for a silk factory and promote his silk business. Twenty acres on the Honan River within the city limits of Canton were pledged for the factory. Plans were drawn up for an office, a store room and a building to accommodate one hundred looms. Officers, trustees, and a detailed business plan are listed.
Also in the file are business cards for Mark Ten Suie Co. and Mak Chin Sui, an undated article from the Seattle Post-Intelligencer with a photo of Mark Ten Suie, and another unidentified article with the headlines, “Chinese Mission Arrives in City, Silk Merchants on Way to International Exposition at New York, Local Business Sought, Delegation from Canton Expresses Hope for Friendly American Dealing.”

On 6 October 1930 Can Ho (alias Howard Kan), a merchant and member of Gon Wing & Company, 1307 First Avenue, Seattle, WA, filed an applicant for a re-entry permit, form 631. He was 52 years old and was born in Nam Tong Village, China. His parents were Sai Yick Kan and Leong Shee. He was married to Chun Shee who had died recently. He was originally admitted to the U.S. in 1907 and visited China in 1916, 1927 and 1930.
The Immigrant Inspector visited Gon Wing & Company and estimated the merchandise on hand was worth in excess of $3,000. He recommended that Can Ho’s application be approved.

In 1930 Rev. K. H. Yeung was a minister at the Chinese Presbyterian Church in New York City. His wife, Lee Chan Wah and children were applying to join him in New York