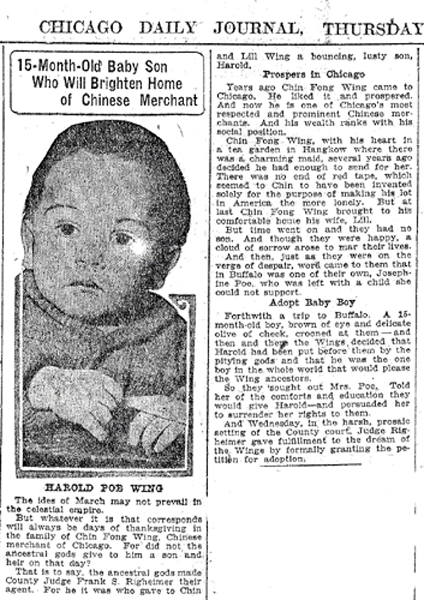 Chin Fong Wing and his wife Lill Wing adopted Howard Poe, a Caucasian boy, fifteen months old, in Chicago, Cook County, Illinois in March 1921. They gave him the Chinese name of Yung Gung-Jork  翁公爵.  Howard’s biological mother, Josephine B. Poe of Buffalo, New York, gave her consent in writing. The file contains a newspaper article about the adoption and a photo of Harold from the 17 March 1921 issue of Chicago Daily Journal.

Also in the file are Harold Poe’s adoption papers and birth certificate. He was born in Detroit, Michigan on 18 December 1919 at 12 o’clock noon. His father was unknown; his mother was 19 years old; German/Chinese. Another document lists his grandfather as George H. Poe. His adoptive mother took him to China in February 1927. They lived in Hong Hen village, Meow Ben, Toy San, Canton, China and Yung attended school there. After his mother died in 1937, Yung applied to returned to Chicago to be with his father, a secretary at the On Leong Merchants’ Society. The file contains another Chicago Daily Times newspaper article from 4 May 1938, titled “Life of Wonder Awaits White Boy Reared in Heart of China,” and includes two photos of Yung Ging-Jork–when he left for China in 1927 and upon his return in 1938. 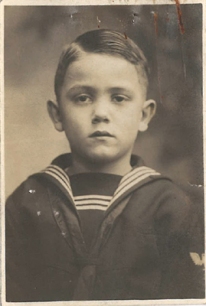 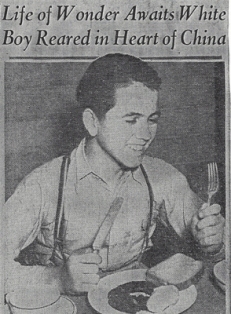 Yung Ging-Jork was admitted at the Port of Seattle two days after his arrival on 2 May 1938.