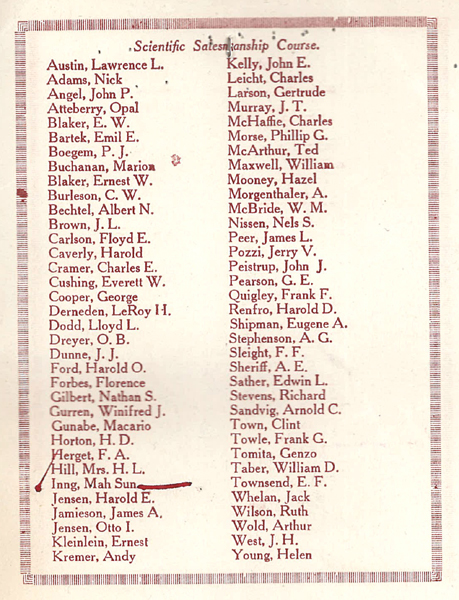 Mah Sun Inng was born in Bak Sar village, Sunning District, China about 1901. He was the son of Mah Sin Dung, a merchant in Vancouver, British Columbia, Canada. His mother lived in China. Mah landed in Seattle in 1919 and was admitted as a Section 6 student. After graduating from Wilson’s Modern Business College in February 1922 from the bookkeeping course and the scientific salesmanship course he became a merchant for Quon On Company on 660 King Street in Seattle. He had worked there part time as a salesman while he was going to school.
In 1922 Mah Sun Inng was applying for a one-week visit to his father in Vancouver, B.C. Earl H. Senn, an electrician in Seattle, was a witness for Mah. Senn testified that he had done a lot of work on Mah’s car. H. E. McGoldrick, an automobile electrician, also testified that he had worked on Mah’s car. [Neither one mention what type of car Mah owned and the interrogators did not ask about it.]
[The 8-page program for the 27th annual graduation exercise for the Wilson’s Modern Business College contains a listing of the class officers, class honors, the program, and graduates of the 1921 courses for shorthand, full commercial, bookkeeping, and scientific salesmanship.]