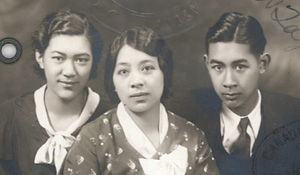 Fannie Seto More (Lew Tue or Lew York Lue) was born on 9 July 1890 in Olympia, Washington. In 1913 she married Seto More; a Canadian citizen and a Canadian Pacific Railways passenger agent.  Because Fannie married a Canadian citizen she lost her U.S. citizenship. When she traveled to the U.S. from her home in Vancouver, B. C. her classification under the Chinese exclusion laws was “traveler.” Her two children, Wilfred and Maysien were both born in Vancouver. Wilfred Bientang Seto was born 21 August 1915 and Maysien Geraldine Seto was born 30 April 1918. The three traveled from Vancouver to Blaine, Washington via train many times, had Canadian certificates of identity, and became well known to immigration officials.

Fannie’s file starts in 1909 and covers her many trips between Vancouver, B. C. and Seattle, WA until 1940. The following is some of the information gleaned from her file.  Her parents were Lew King and Lee Shee. She had three brothers and one sister; Lew Geate Kay, Lew Get Soon, Lew Get Don, and Lew York Lon, (Mrs. Tom Shue Wing). Lew King, a member of Jong King Company and Wah Hing Company in Seattle, died in August 1908. Her mother, Lee Shee, was born in Kin Ham village, Sunning district. She was admitted to the U.S. in 1873 as the wife of a merchant about seven months after she married Lew King. She died in Seattle in 1914.

In 1909 Fannie was traveling from Seattle with student status. Her mother, Lee Shee, and brother, Lew York Lon, were witnesses for her. Lee Shee testified that she and her husband moved to Seattle in 1883. Seven months after they arrived, someone set fire to their store on old Third Avenue South. They moved nearby to the apartment above Hong Yee Chung Company store and stayed there until the Great Fire of Seattle in 1889. After the fire they lived in Olympia for a few years until they returned to Seattle.

S. L. Crawford was a Caucasian witness for Fannie Seto More in 1909. He testified that he had been living in Seattle for thirty-four years [since 1875]. Crawford was a reporter for the Post Intelligencer during the Chinese riots in 1886 and city editor for many years. He had frequent dealings with Lew King and knew him intimately. Lew King had been a Chinese interpreter for the court when Judge Lind was on the bench. [Judge Lind was a Thurston County judge in the early 1900s] Crawford identified photos of Lew King’s children including the applicant.

Witness Louie Kay, also known as Yin Lim and Hong Po, testified that he was a member of the Lew family but not related to Lew King. He came to Seattle in 1879; was away for the riots; and came back about two months after the 1889 fire.  He was questioned about many things concerning the extended Lew family but most of the information did not pertain to Fannie.

Fannie’s mother underwent a serious operation in Seattle in 1913 but because Fannie had lost her U.S. citizenship she was unable to secure a Section 6 certificate so she could cross the border to visit her.  The consul at Victoria refused to approve her certificate on the grounds that she was not a Canadian citizen even though her husband was a member of the exempt class in Canada. Her brother, Lew Gate Kay, of the Chinese Consulate in Seattle, made an appeal to the immigration authorities and Fannie was allowed to land without a Section 6 certificate. Commissioner White informed the Commissioner-General of Immigration in Washington, D.C. about what had happened. His letter of explanation is in Fannie’s file. [It never hurts to know the right people and pull a few strings.]

A 1921 letter from Frederick M. Ryan of the American Consular Service in Vancouver, B.C. confirmed that Mrs. Fannie Seto More acquired British citizenship through the naturalization of her husband.

By 1933 Mr. Seto More was manager of the Chinese Department of the Canadian Pacific Railways in Vancouver.

In 1938 Fannie was traveling to visit her brother, Lew G. Kay, a staff member of the Chinese Consulate in Seattle, and stopover in Oakland, California to see her sister. 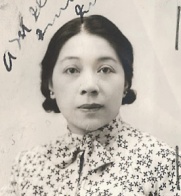 The file ends with Fannie’s and her daughter’s visit to Seattle in February 1939.

[Tamia Duggan, CEA volunteer at NARA-Seattle, indexed this file and brought it to my attention.]

Yee Shee, age 27, arrived at the port of Seattle on the Princess Marguerite on 28 September 1929. Her admittance status was “wife of merchant.” She was accompanied by her husband, Chan Sheung 陳相, and daughter, Chan Git Oy, age three. Yee Shee’s paper work consisted of a U.S. Consular certificate, an affidavit with photos of her, her husband and daughter, signed by her husband and sworn by a Washington State notary public; a Declaration of Non-Immigrant Alien sworn by Kenneth C. Krentz, Vice-Consul of the U.S. at Hong Kong; and Visa No. 118.

Yee Shee was born in 1902 in Lung Tin village, Toysan District and lived there until she married Chan Sheung in November 1920. After marrying she moved about 3 or 4 lis [about a mile or a mile and a third] to Sam Gong, her husband’s village, Hoy Ping district. Her father, Yee Won Jung, died when she was young and her mother, So Ho Shee, raised her with money he had left them. Now Ngon, a marriage go-between, arranged Yee Shee and Chan Sheung’s marriage; they were married under the new customs. They did not see each other until their marriage day. Yee Shee’s dowry was a dresser table, dining table, two chairs, leather trunk, wooden trunk, clothes cabinet, and a wash-stand. Chan Sheung gave her a gold ring after they were married. Their wedding ceremony consisted of worshiping her husband’s ancestors and serving him a cup of liquor. Their red marriage paper shows three generations of Yee Shee’s family. [mentioned but not included in the file]

Yee Shee’s interrogation describes her family, her husband’s family, their village and home—six pages in all. When Chan Sheung returned to China from the U.S. in May 1929 he brought with him an American trunk, suitcase, sea bag, one box of laundry soap and some eatables.

Their first son died shortly after his birth. A woman doctor, Dr. Look Ooh, attended Yee Shee for the birth of her second child. Their daughter, Chan Git Oy, born 17 June 1926 was accompanying them to the U.S.

Yee Shee described their trip to the United States: they left the village about 7 a.m. and walked to the landing, took a row boat to Chung Sar market, transferred to another boat to Bok Gai, then boarded a steamer to Hong Kong. They were in Hong Kong a little more than two weeks at the Ung Nom Hotel, room number 13 before sailing for the U.S. While in Hong Kong they went to see a Chinese show and made several trips to the American consul to get the necessary forms and photographs.

The testimony of Chan Sheung (marriage name Chan Leung Park) was also six pages long. He stated that he was 31 years old, a salesman and member of the Wing Wah Chong Company in Cleveland, Ohio. He first came to the U.S. at San Francisco in July 1912. He had made three trips to China since then; once as a student, then as a laborer, and currently as a merchant. Chan Sheung described his family in great detail.

The village of Sam Gong had nine houses and one lantern house. Their home, which he inherited from his father, was “a regular five-room brick building; tile floor in every room; court is paved with cement; two outside windows in each bedroom with five iron bars, wooden shutters and glass door in each window.” There was an alarm clock on the table in the bedroom and several photographs hanging on the west side wall of the sitting room. The village had a brick wall about six feet high at both ends with bamboo trees in the back. A granite stone road ran in front of the village. Beyond the road was a stream where they obtained their household water.
After lengthy interviews of Yee Shee and Chan Sheung there were only a few minor discrepancies—the exact houses their neighbors Chin Yoon Ying and Chan Wee Lee lived in the village; the number of suitcases they had when they left their village; and Yee Shee forgot that her husband bought her a brown purse in Hong Kong. The inspectors asked Yee Shee about these inconsistencies and her new testimony agreed with her husband’s statements. They were admitted to the United States. 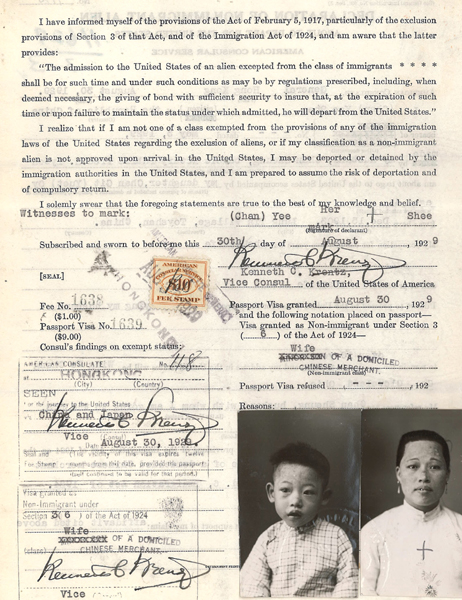